I’ve been doing a lot of dovetails recently, and although I’m happy with the technique I use for making them, I’ve never been happy with the tools I’ve used. Or, more specifically, the coping saw I use to cut out the waste. The blade on a coping saw is a bit heavy for the work and a bit clunky to use. All that changed when I came across an old fret saw rusting away in a corner of an antique store.

It looked in a sorry state and I don’t think I paid more than £2 for it. It was so covered in rust that it took lots of penetrating oil and a careful combination of aggression and subtlety to get it to pieces: 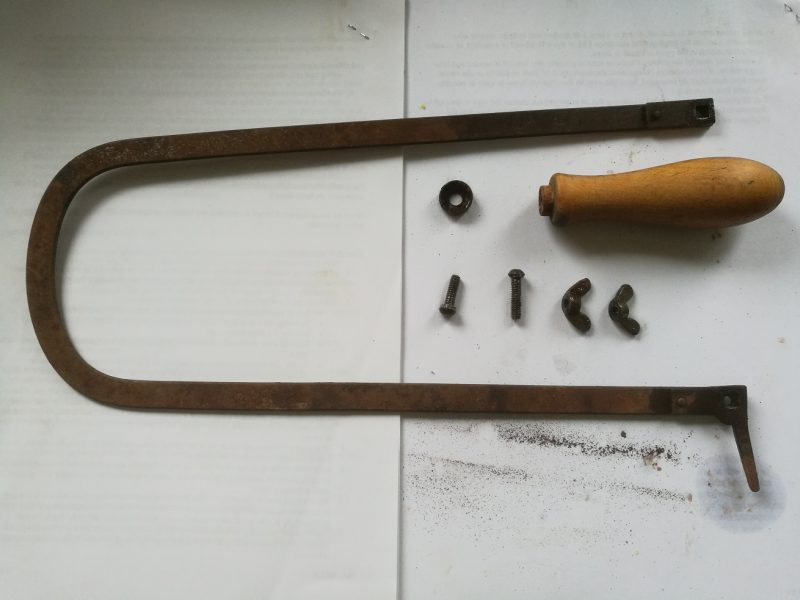 I dropped all of the metal pieces in a vinegar bath and left them to soak. Whilst they were sitting I started work on the beech handle. The ferrule had come off during disassembly so I could work on just the wooden part: 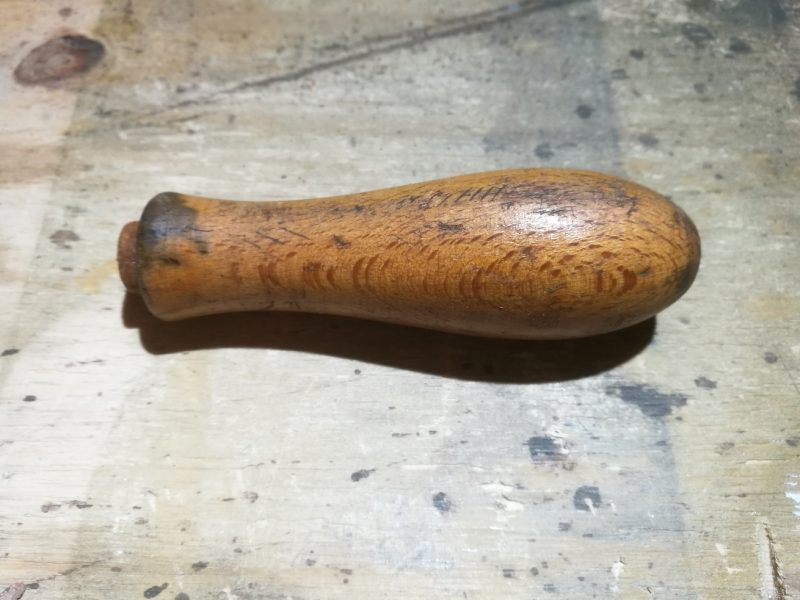 As you can see it had a few scuffs and scrapes and had been accidentally stained at some point. It was also varnished, a finish I don’t like to handle as it is uncomfortable if used for a long time. Starting with 100 grit and working up to 240 grit I sanded the handle back to bare wood to remove all of the damage: 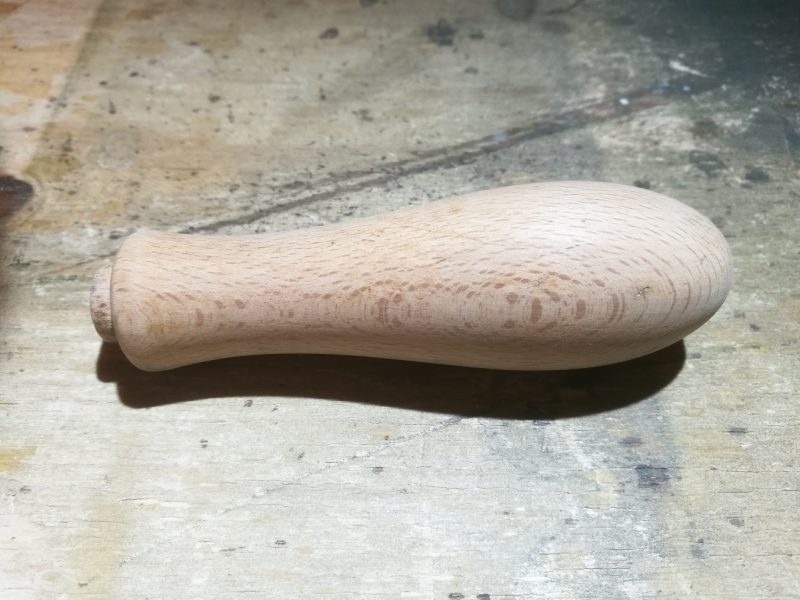 Next I used Alfie Shine to protect the wood. I was careful to avoid getting the wax on the area where the ferrule would sit, as I would be gluing that into position and it wouldn’t adhere if there was wax there. After several coats the handle was finished:

The next day I removed all of the metal pieces from the vinegar bath and washed them thoroughly under hot water to stop the reaction. I then began to scrub at each piece with a soft metal brush to remove the rust and reveal the bare metal underneath.

As I started to clean the frame, I found a brand name: 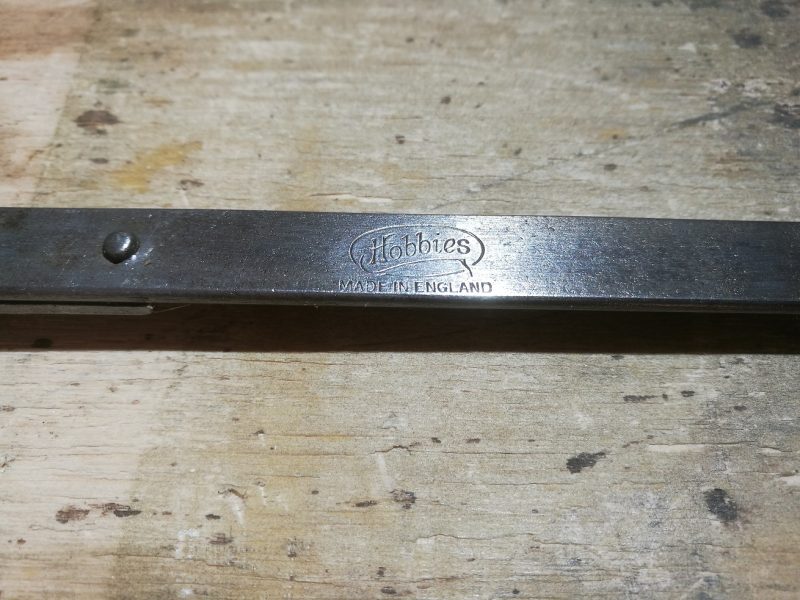 I’ve never heard of Hobbies and the internet isn’t revealing anything after a quick search, so its heritage may have to remain a mystery for now.

I cleaned up all of the remaining metal parts, paying extra attention to the screw threads as they were quite rusty and needed to be in good condition to work effectively: 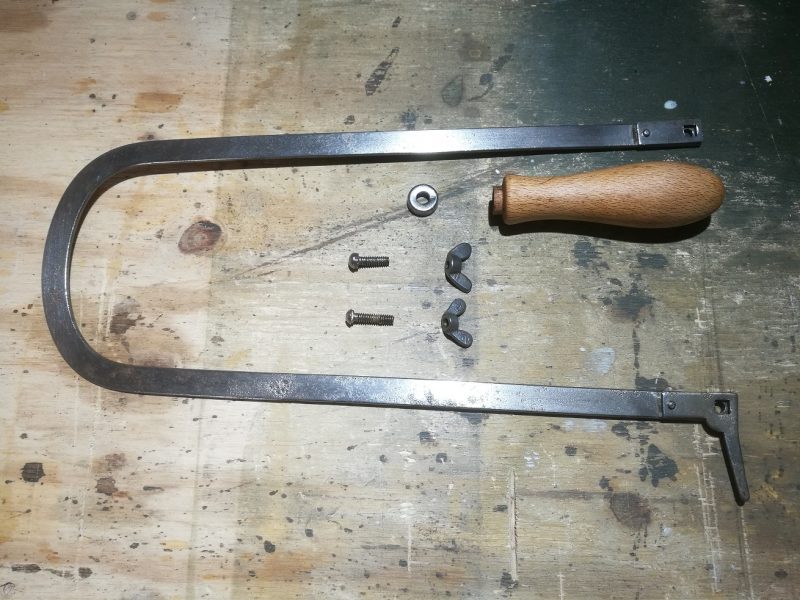 There were three small jobs left. First I glued the ferrule to the handle and left it to set. Next, I reassembled the saw and fitted a new blade. Finally I fitted the handle once the glue had set, and the restoration was complete: 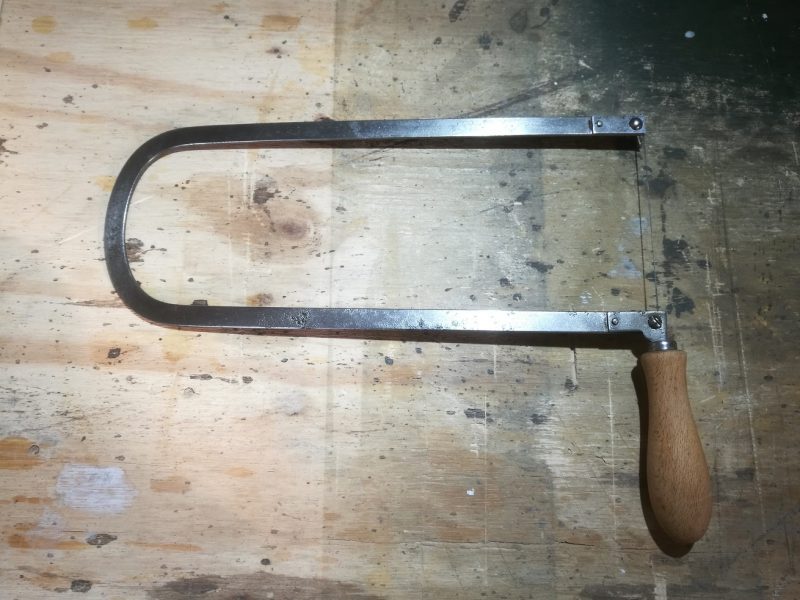 All that was left was to take it for a test drive, which it passed with flying colours.

So I’ve got a new tool for very little money, I’ve brought something back from the dead instead of buying new and I’m much happier with my dovetails. Not bad for a few hours over the weekend, even if I say so myself!